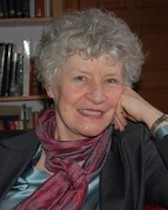 Vaux has written on both the arts and issues in ethics including co-author of Dying Well in the Late Twentieth Century, Abingdon, 1996, "Suffering and healing in films," Christianity and the Arts, Summer 1999, and wrote Finding Meaning at the Movies, Abingdon, 1999. She has contributed an article toNation and World, Church and God (Northwestern University Press, 2014), essays on the films of Robert Bresson as well as on The Wise Fool toEncyclopedia of the Bible and Its Reception 3 (© Walter de Gruyter, Berlin/New York 2010).

She has also written Film and Catholicism for the New Catholic Encyclopedia Supplement 2011 (Ed. Robert L. Fastiggi. Vol. 1. Detroit: Gale, 2011. p258-267) and completed a long essay on the films of Robert Bresson: "Biblical Resonance from a Christian Atheist" for Handbook of the Bible and Its Reception (DeGruyter, forthcoming in 2015)

She teaches both general and specific topics on Religion and Film. Her current research interests include the films of Jean-Pierre and Luc Dardenne (Cannes Palme d'Or winners 1999 and 2005), and "Food and Film."

Nation and World, Church and God: The Legacy of Garry Wills, September 30th, 2014.

The Ethical Vision of Clint Eastwood, 2011.

Clint Eastwood is a Hollywood icon, with five Academy Awards, five Golden Globes, and numerous other accolades for his work as an actor, director, producer, and composer. Yet because he rose to fame in "spaghetti westerns" and Dirty Harry shoot-em-ups, few critics have ventured to explore Eastwood's philosophical, ethical, and artistic agenda as an intellectual filmmaker.

Addressing this void, film scholar Sara Anson Vaux analyzes fifteen of Eastwood's best-known films from narrative, artistic, and thematic perspectives. She traces the nuanced development of Eastwood's unfolding moral vision over a forty-year continuum, showing how this vision has grown more sophisticated even as many of the motifs expressing it -- justice, confession, war and peace, the gathering, the search for a perfect world - have remained the same.

Finding Meaning at the Movies, Abingdon, 1999.