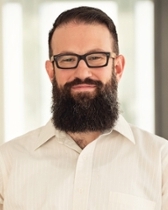 Eli Rosenblatt (PhD, University of California, Berkeley), is Visiting Assistant Professor of Religious Studies at Northwestern University. His research focuses on modern Judaism, with a particular emphasis on Ashkenazic and Atlantic Jewish cultures in the 19th and 20th centuries. He is most recently the author of “Sphinx Upon the Dnieper: Black Modernism and the Yiddish Translation of Race,” an article in the Slavic Review which examines the Yiddish-language translations of the Harlem Renaissance writers in their political and cultural contexts. He completed a postdoctoral fellowship at the Frankel Institute for Advanced Judaic Studies at the University of Michigan, and has taught at Berkeley, George Washington University, and Georgetown University’s Walsh School of Foreign Service. His two current book projects explore the ways in which modern Jewish writers, intellectuals, and activists received and interpreted racial language and politics, both in Eastern Europe and in the Caribbean country of Suriname, home to one of the oldest existing Jewish communities in the Western Hemisphere.