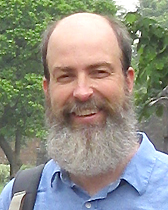 Mark McClish specializes in classical Hinduism, with a focus on early legal and political literature (dharmaśāstra and arthaśāstra). He holds a B.A. in Religious Studies from Indiana University and an M.A. and Ph.D. from The University of Texas at Austin in Asian Cultures and Languages with a specialization in Sanskrit and Indian Religions.

His research uses a close reading of text to explore the intersection of the religious, legal, and political in classical Sanskrit literature. He is particularly interested in the frameworks of political thought in classical South Asia, the development of Hindu law, and the political dimensions of Brahmanical orthodoxy in the period. McClish’s current research interests include the early history of the dharmaśāstra tradition, Brāhmaṇical ritual and law, and the concept of fate in Indic political thought.

He is the co-author of The Arthaśāstra: Selections from the Classic Indian Work on Statecraft (Hackett, 2012) and author of The History of the Arthaśāstra (Cambridge 2019). His research has been supported by the European Research Council (SAW-ERC) and Fulbright, among other organizations.

His areas of teaching include Hinduism, religion in classical India, and Hindu law, and politics and religion.

“Politics and Power in Ancient India,” in The Cultural History of Hinduism in the Classical Age.  Bloomsbury, forthcoming.

The History of the Arthaśāstra: Sovereignty and Sacred Law in Ancient India. Cambridge: Cambridge University Press, 2019.

‘The Four Feet of Legal Procedure and the Origins of Jurisprudence in Ancient India.’ (w/ Patrick Olivelle) Journal of the American Oriental Society 135.1 (2015): 33-47.

The Arthaśāstra: Selections from the Classic Indian Work on Statecraft. Tr. with introduction and notes by Mark McClish and Patrick Olivelle. Cambridge: Hackett Publishing, 2012.