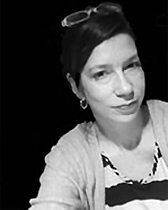 J. Michelle Molina (PhD, University of Chicago, 2004) studies the Society of Jesus in the early modern period. She has explored Jesuit spirituality in an effort to understand how individuals – both elite and commoner -- approached and experienced religious transformation. In particular, she has been interested in examining the impact of the Ignatian Spiritual Exercises – a meditative retreat geared toward self-reform – on early modern global expansion. Molina’s book, To Overcome Oneself: The Jesuit Ethic and the Spirit of Global Expansion is published with University of California Press. The book examines the impact that this Jesuit program of radical self-reflexivity had on the formation of early modern selves in Europe and New Spain.  She offers a novel retelling of the emergence of the Western concept of a “modern self” by demonstrating how the struggle to forge and overcome selves was enmeshed in early modern Catholic missionary expansion.

Momentarily emerging from the early modern period to bear witness to events in her own era, Molina has explained what it might mean that the current pope is a Jesuit.  She has observed that it is best to situate this Jesuit pope in relation to the modes of self-formation found in the Ignatian Spiritual Exercises and, importantly, that this Catholic imperative to “know thyself” indicates that Pope Francis is well versed in what has been termed “philosophy as a way of life.”

Having studied Jesuit global expansion, Molina has turned her attention to a period of “contraction” for Catholic missionary evangelicalism.  She is now writing a book about the expulsion of the Jesuits from Mexico in 1767.  The book tells the story of the arrest, expulsion, and aftermath through the study of three kinds of inventories.  The first are the lists of books and objects that the Jesuits were compelled to leave behind after their arrest. The second inventory is the accounting of self that shapes the conversion narrative of a young Swedish Lutheran who, inspired by Voltaire, took up life as a merchant to learn more about the world and to find “true religion” based upon reason.  When he boarded a ship to Corsica in 1769, his travelling companions were 200 Mexican Jesuits recently expelled from the Americas.  In close confines with these members of the Society of Jesus for the duration of his five-week journey, Thjülen chose to convert to Catholicism and, shortly after arriving in Italy, he became a Jesuit.  The third inventory is the collection of “memorias” or obituaries of dead Jesuits from the Mexican Province, composed by José Felix de Sebastián from the moment of the arrest in 1767 until 1796.

In her teaching, she offers a graduate seminar on embodiment, materiality and affect.  For undergraduates her courses include an undergraduate research seminar on refugees, migration, and exile; an introduction to religious studies theories and methods; the study of the problems of race and religion in Latin America; as well as a course on religion and existentialism in mid-20th century film.

To Overcome Oneself: The Jesuit Ethic and Spirit of Global Expansion, 1520–1767 (University of California Press, 2013)

“Consolation without Previous Cause?  Consolation, Controversy, and Devotional Agency.”  The Challenge of God: Continental Philosophy and the Catholic Intellectual Tradition.  (Oxford: T&T Clark, 2020).

"An Ambivalent Philosophy of the Concrete," in Rethinking the Human (HUP, 2010)

Co-authored with Ulrike Strasser, "The Global Currency of Female Sanctity: A Seventeenth-Century Mexican Mystic and her Jesuit Biographers from the Spanish and German Empires," Women, Religion and the Atlantic World, 1600-1800, eds. Danna Kostroum and Lisa Vollendorf (University of Toronto Press, 2009)

"Technologies of the Self: The Letters of Eighteenth-Century Mexican Jesuit Spiritual Daughters," History of Religions (May 2008)