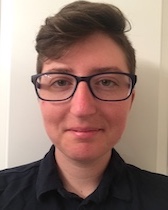 Pema McLaughlin is a doctoral student in religious studies focusing on Tibetan Buddhism. They are currently interested in 19th and 20th century Tibetan textual and ritual models (particularly the sngon 'gro or preliminary practices) for how people become Buddhist practitioners, and the lived religious dynamics of such practices in the global Tibetan diaspora. Other research concerns include the scholarly and religious discourse surrounding Buddhisms in America, the consequences of modernity as a category for shaping religious communities, and the role of affect and emotion in Buddhist practice and interpretation. Pema received a B.A. in Religious Studies from Reed College; their article "Imagining Buddhist modernism: the shared religious categories of scholars and American Buddhists," published in Religion, was adapted from their thesis. Pema has an M.A. in Buddhist Studies from the University of Oxford, where they studied via a Rhodes Scholarship. Their advisor is Sarah Jacoby.